What did the Egham Teen Reading Group think of 'Going Solo' by Roald Dahl? 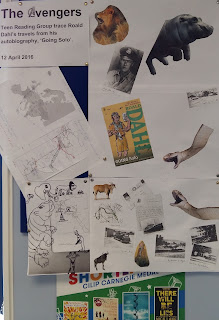 On Tuesday 12 April, the Egham Library teenage reading group, known from this meeting onwards as 'The Avengers Reading Group' came together to discuss Roald Dahl's autobiography 'Going Solo'.
In this book, Dahl shares with his readers a crucial three years of his life, when in the Autumn of 1938 at the age of 22 he sets off on a journey to Africa to work for the Shell Company and in the following year, when World War Two breaks out, he becomes a fighter pilot with the RAF travelling to the far flung outreaches of Africa, Iran, Egypt, Israel, Malta and Athens, fighting the enemy in the air whilst also struggling with difficult living conditions in primitive army camps. Dahl returned to England three years later in Autumn 1941 during which time he had no communication from his family and friends at home.
Unfortunately most of the group didn't enjoy Dahl's autobiography and had little motivation to talk about Dahl's experiences as a fighter pilot. So what put them off the book? The style of writing was a barrier - some of the group members said that the language was old fashioned and boring. Dahl's experiences weren't engaging - some of the members said they didn't want to read about Dahl in his early and mid-twenties, he was too old and they couldn't identify with him.
However, the craft activity encouraged the group to think about Dahl's exploits and it was encouraging to see how well the group was able to use the text to plot on a map Dahl's journeys and to use the animal books in the JNF part of the library to identify the wildlife of Africa that Dahl saw during his time with the Shell Company and to select some of the letters he sent to his mother during the War, which she never received. These were all put together to make an interesting display in the children area of the library.